The Bristol Balloon Fiesta is taking place at the moment. I’m not really one for crowds, so last night instead of heading over to Ashton Court to see the festival, I drove to a top-secret location just south of Bristol, on top of a hill which overlooks the city. Armed with a pair of binoculars and a telephoto lens, I photographed the night glow and fireworks from afar.

The first photo, taken shortly before sunset shows the surroundings. I was about four miles from the fiesta at Ashton Court. In the background you can see the Second Severn Crossing, which is about 12 miles away.

When it got dark, the night glow started. It took about quarter of an hour of the balloons flashing, but I’ve decided to publish only one picture, because through the lens of the camera all the photos came out remarkably similarly. If you want to see what it was like, I also shot a couple of minutes of video which is below the image gallery.

After the night glow finished, there was an impressive round of fireworks. Just as it concluded, the rain started and we scurried back to the car. A good night out. 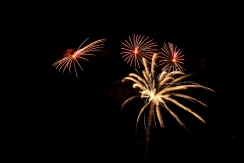